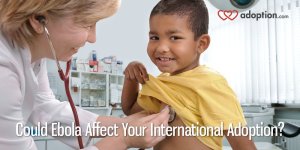 The 2014 outbreak of Ebola is the largest in history.  Due to modern medicine, proper sanitation, and education, the risk for an outbreak in the United States is low.  That hasn’t stopped the fear of the virus from spreading. The latest numbers report that there are nearly 9,000 cases of Ebola, with half ending in death (CDC.gov). The first case confirmed in the US occurred on September 30, 2014 in Dallas. The patient has since passed away.  The news was quickly followed by another instance of a passenger observed with symptoms promptly taken by the CDC at Newark airport on October 4, 2014.  Now there have been two confirmed cases of Ebola being transmitted in the US from the patient in Dallas to healthcare workers.

To learn about what the Children’s Hospital Cincinnati International Adoption Center had to say on the matter, click here to continue reading the story on adoption.com.