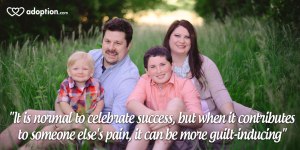 Adoption comes with complex emotions. Often, the emotions are consuming and misunderstood. One of the emotions that a lot of adoptive parents unexpectedly find themselves feeling is guilt. It can come as a surprise if you find yourself suddenly overwhelmed with emotions that you translate as guilt after you have adopted. It is not uncommon to feel adoption guilt…

It is normal to feel a wide variety of emotions while adopting.  The emotions can change minute to minute, day to day or year to year.  Being empathetic to the other members, while keeping things in perspective only help us learn and grow.  To read the full article, visit adoption.com. 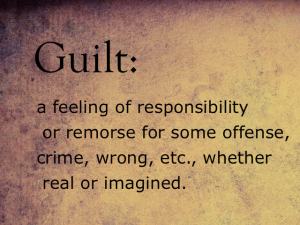 Adoptions come with complex emotions.  One of those emotions that most birth parents and many adoptive feel is guilt.  I think it is completely understandable (yet unnecessary) for a birth parent to feel guilt.  They may feel guilty for making the adoption plan, for not being in a better place in their life, to wanting more for their child and themselves.  But, at the same time, it is my hope that they also see the all the positives of why they are making that choice.  It can come as a surprise when people outside of adoption learn that adoptive parents may also suffer from feelings of guilt.

Guilt is a loaded word.  The definition of guilt to many people is that you have done something “wrong”.  However, I think these people are just looking at the word guilt differently.  While some may use the term “guilty” to describe the feelings they have for feeling joy with their adopted child, other words could easily be used in its place.  Empathy, Compassion, Appreciation, Affinity, Pity, Sympathy, etc.  It really is about the person feeling the emotion and to what degree they perceive the situation.  Some people just tend to beat themselves up more than others.  Some people rely on the good in a situation to thrive or survive through it. (Some people just lack understanding and feel entitled.  Let’s hope none of my readers are of that variety.)

While Ezra’s birth mother is an incredibly strong woman, I know this hasn’t been easy for her.  She seems at peace and very proud of Ezra as well as her decision, but still, I am sure there are times that she wishes she could have parented him instead of placing him for adoption.  Ezra’s birth father has always shown more emotion when it comes to the struggles he faces with adoption.  He has always been extremely kind to us and never showed us any resentment.  He is always smiling when we are together and he is very affectionate toward Ezra.  These things just show me how much he cares.  Watching the yearning in his eyes gives me guilt.  It gives me guilt to know that we have the ability to give “more” and because of that we were chosen to parent their child.  It is very normal to celebrate success, but when it contributes to someone else’s pain it is more guilt producing.

Guilt in adoption hopefully fades with time as the open adoption relationship blossoms into a healthy, loving extension of your family. Understanding that these people chose you to parent their perfect little creation is something you should not feel guilt over.  But just because it is OK to not feel guilt, does not mean it is OK to feel indifferent or not want to help ease their pain.  Sharing an open adoption and open communication is good for all members of the adoption triad.  However, if you allow guilt to consume you, you may begin to suffer in other areas and your child will also suffer.

Have you experienced any of these emotions?